In a symbolic show of support for Free Open Source Software and the OpenDocument Format, Brazilian President Lula da Silva recently attended the Linux-related FISL 10 conference in Porto Alegre, Brazil, where he gave an address underscoring the importance of Free Open Source Software to Brazilian national interests. He appears here wearing a hat with the ODF logo (the OpenDocument Format is a legally unencumbered document format upon which any company or community project can easily build.) 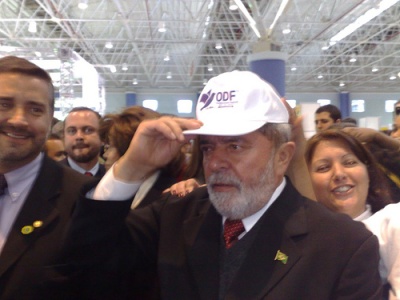 According to Free Software community leader Jon Maddog Hall, who sat in the front row for da Silva’s speech, the Brazilian President’s remarks lasted about 15 minutes, and was delivered without a teleprompter or prepared notes, which tends to indicate that Free Software is a topic with which he is personally familiar. President Da Silva’s speech to the conference has been translated into English here, and the video for his speech is available on YouTube in three segments, here, here and here.

In his speech, President da Silva spoke of the need to create Brazilian IT initiatives and for greater independence from Microsoft. He said that Free Software would provide Brazilians the opportunity to demonstrate their ability to create high tech jobs on par with other countries, a step that he felt would enhance Brazilians’ image of themselves:

Brazil is the fifth largest nation in the world by both population and land mass, and is the largest economy in the Americas south of the Rio Grande border between the US and Mexico. The fact that the head of state of an important country like Brazil lent his symbolic clout to Free Open Source Software is a digital tipping point, a sign to Brazilians, to proprietary companies like Microsoft, and to world leaders elsewhere that Free Software is ready for mainstream adoption. As a consultant to businesses weighing the adoption of Free Open Source Software, Jon Maddog Hall had this to say of President da Silva’s speech:

Just as Obama’s election reset the expectations of young black people in the United States, Lula’s speech reset the campaign for Software Livre (Software Freedom) in Brazil and everywhere else. Now when students want to use Free Software in their classes, they can point to Lula’s speech and say that Free Software is important. When government employees want to use Free Software to solve a problem, and their boss says to ‘use Microsoft’, the employees will have a new argument to use. And as I go around the world talking to government leaders, university presidents, and company owners, I can point to this speech on YouTube and say ‘This is what the president of Brazil had to say about Free Software.’

Indeed, heads of state typically use their office to highlight matters of national and international importance, so the mere fact that President da Silva took time out of his busy schedule to make an appearance at a Free Software conference signals that there are more weighty issues at stake than whether Free Software makes better technological tools than some competing proprietary vendors, such as Microsoft for example.

In particular, President da Silva spoke about the importance of Free Open Source Software in closing the digital divide. As with government officials of the Spanish state of Extremadura, President da Silva spoke of the Free Software movement as being an important part of a broader digital inclusion movement aimed at bringing the benefits of technology to economically disadvantaged Brazilians. Whether Free Software makes a better mousetrap than Microsoft is not a question really worthy of the attention of a head of state. But the question of how a government can most efficiently deliver the benefits of 21st century technology certainly is topic deserving the attention of a head of state. At least President da Silva thought so.