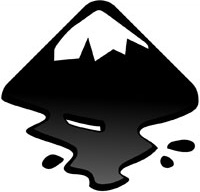 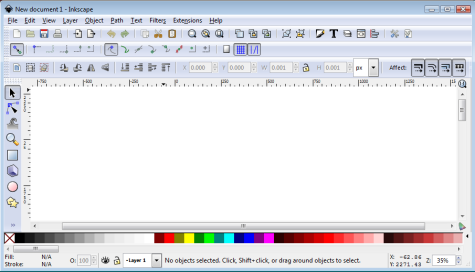 Inkscape users will immediately notice one new tool added to the toolbox: an eraser. The eraser can do two things: delete entire objects (paths, shapes, etc.), or erase parts of objects by cutting through them with a Boolean “subtract” operation, slicing the paths it encounters.

The Pen and Pencil tools have gained some new features, including a polyline mode to draw multiple line segments together, a paraxial mode to draw lines restricted to the coordinate axes, a sketch mode that averages multiple strokes together, and support for vector-based “stroke shapes” to enable the user to draw tapered, natural-looking lines. 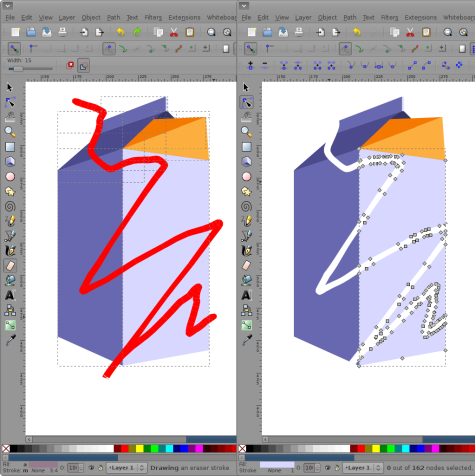 The Tweak tool has been expanded, so that it can now “sculpt” whole objects in addition to nodes on a path — pushing them around like a brush, attracting or repelling them around the mouse cursor, and applying jitter, rotation, and blur.

The Text tool sports several editing improvements. The first is a built-in spell checker, sure to be a lifesaver to many. The second is support for common text-editor keystrokes like page-up and page-down, which will make editing text-heavy documents easier.

Finally, the Node tool can now be used to edit masks and clipping paths, in addition to regular paths. A new type of node, “auto-smooth” allows you to create shapes that automatically smooth out as they are edited. 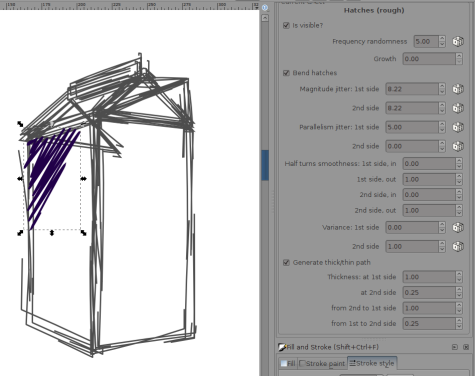 Demonstration of Inkscape’s new “sketch” and “hatches” path effects; both are highly configurable: the settings for “hatches” are shown

The most talked-about new effect, though is Spiro Splines. Based on mathematical work by Raph Levien, splines are a new type of path that behave like springy metal rods, automatically smoothing to minimum curvature between their nodes. There are no control point “handles” as with Bezier curves. Spiro Splines can be created with a path effect, or with a new spiro spline mode for the Pen and Pencil tools.

“Extensions” is a new menu item holding Inkscape plug-ins written in Python — in previous releases, these extensions resided in the “Effects” menu, which provided some confusion with path effects.

Some other interesting additions include the “Alphabet soup” extension, which creates randomized letter-like glyphs resembling unusual alphabets, “Convert to Braille,” which generates dot patterns (2D images only; not raised Braille) from text, and “Draw from Triangle,” which creates geometric objects and performs geometry calculations based on triangles. 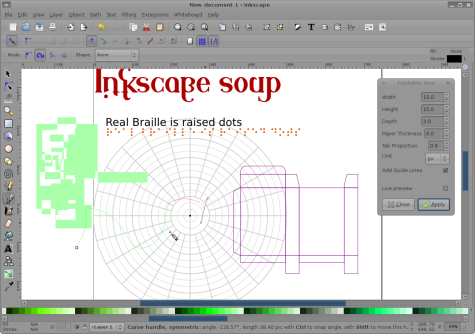 Some of Inkscape’s new extensions and drawing modes, including “Alphabet Soup,” “Convert to Braille,” “Polar Coordinates,” and “Foldable Box.” On the left are paths created with the Pen tool’s paraxial mode and spiro spline mode

Other extension utilities add path extrusion, path scattering, interpolation of object attributes, and complex re-stacking. A JavaScript extension allows you to embed JavaScript attributes in a drawing, which will be useful for SVGs exported to the Web. Inkscape does not contain a JavaScript interpreting engine, however; it only preserves the JavaScript for export.

Several improvements were made to Inkscape’s ongoing implementation of the full SVG specification. First is file-size reduction by optimizing the CSS properties and path data written to file — for example, if an object has the “stroke:none” property specified, Inkscape can skip the inclusion of numerous stroke property settings that would take up needless space.

Inkscape also preserves the (script) tag, although as with JavaScript, the application itself does not yet implement SVG scripting. Inkscape also supports the W3C’s official SVG Test Suite, so you can run compliance checks for any SVG features you are curious about.

This release also adds support for reading and rendering SVG Fonts, so that font designers can use Inkscape as a font design tool. This feature was added by a student working with Inkscape as part of Google’s Summer Of Code internship program.

Many new changes involve the user interface and enhancements to the editing behavior — starting with a new timed auto-save feature that prevents work loss by automatically saving documents in the background.

Improvements to working with grouped objects include changes to the “Combine” and “Convert Text to Path” operations. Combine now works on groups of paths as well as on individuals. “Convert Text to Path” now generates a group of paths (one created from each letter), instead of the previous behavior — a single path composed of all of the letters. Cloning objects is also improved; it is now possible to re-link clones that had previously been de-linked from their originals. A new visualization highlights cloned objects when the original is selected.

Snapping behavior has seen a major overhaul. The UI displays a small “cross” visualization when a snap is about to occur (giving the user warning), there is an option delay setting to require a hover time before snapping (to avert accidental snaps), and Inkscape can be configured to only snap at the node nearest to the mouse pointer (to simplify snapping drawings that include a large number of nodes). Snapping can also take place not just to path nodes and guides, but to masks, clipping paths, intersections, page borders, midpoints, handle points, and other locations. The new snapping behavior is configurable through a new snapping toolbar. 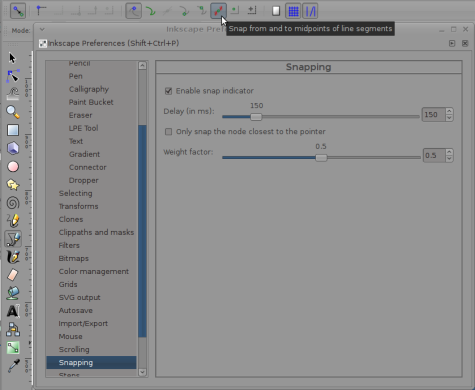 Inkscape’s rewritten snapping feature includes visual indicators, adjustable delay, and a snapping toolbar from which individual snap points can be activated or deactivated

In addition to those changes, there are numerous small enhancements for general editing, such as use of the system-wide clipboard, a shell mode that enables Inkscape to be called from scripts, more configurable guide-lines, the ability to edit linked-in bitmap images in an external editor, and completely themable icons, thanks to the adoption of the freedesktop.org icon theme standard.

All in all, 0.47 marks yet another solid release from the cross-platform, free vector editor.

Inkscape Wiki – documentation, about and more.

Planet Inkscape – what the Inkscape community is blogging about

Our Worldlabel howto on designing  Business cards with Inkscape

3 thoughts on “Inkscape 0.47 Totally Solid with Lots of New Tools”