Tara Hunt’s book, The Whuffie Factor, gives the Free Open Source Software world a tool for thinking about how to reach out beyond the echo chamber of technologists, who already “get” how important FOSS is, to the much larger world of technophobes who, with their 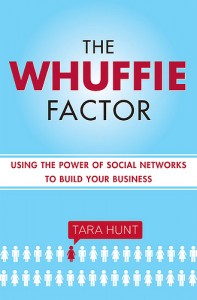 Tara Hunt’s book, The Whuffie Factor can help us in both of those areas. Her book offers both principled guidelines and clear case examples for forging alliances and creating powerful, grassroots channels for reaching end users. The Whuffie Factor should become part of the discussion as to how we build community among mainstream end users.

Hunt’s premise is that social networking web 2.0 tools are leveling the marketing playing field a bit by offering small and medium-sized businesses (SMBs) such as FOSS projects the opportunity to amplify their reach. That concept is not new, and Hunt didn’t invent it with her book, The Whuffie Factor (TWF). But what is unique to TWF is Hunt’s skill in identifying five core marketing principles and showing us how to implement them. The five core principles are:

If all of this sounds kind of open-sourcey, that’s because it is. Hunt’s concept of Whuffie itself comes from a novel called “Down And Out in The Magic Kingdom” by Cory Doctorow, a book which was inspired, in part, by Doctorow’s passion for FOSS. Whuffie is the name that Doctorow gives to the trust-and-esteem-based currency that has supplanted national currencies in his fictitious world. Hackers in that make-believe world have created abundant energy; have figured out efficient matter-energy / energy-matter conversions; and Free Open Source Software has become the norm. As a result, everyone has enough food and energy to get their basic needs met, and so humanity has turned its attention to working for the esteem and respect of peers. Doctorow’s world is a meritocracy; the coolest, smartest, funniest, most clever people garner the most Whuffie from their peers, and the best projects draw the brightest minds.

Hunt doesn’t spend much time ruminating on the theoretical plausibility of the rise of such a Whuffie-based system; to the contrary, she says that Whuffie is what drives much of the current-day Whuffie-based Web 2.0 social networks and documents how it is happening. Whuffie is really nothing more than the trust and esteem of our peers. In Chapter 1, How to Be a Social Capitalist, Hunt says that consumers are growing tired of snake oil business models, such as the music industry, which is hemorrhaging their Whuffie by bullying music lovers. On-line bit-Torrent communities undermine the industry’s business model with file sharing and oppose draconian legislation the industry seeks to pressure lawmakers to pass.

But the music industry could be using be building Whuffie by connecting music fans to musicians, building conversations between musicians and their fan base, and helping fans attend performances given by their favorite musicians. She gives as examples Brian Dear, founder of Eventful Demand, an on-line music networking service, and Jonathan Coulton, a software developer turned musician who was able to quit his day job to focus on his music in part by using Eventful Demand. Eventful Demand allows fans to create demand for their favorite speakers, authors, and musicians, who are then able to book facilties with demonstrated demand for big venues. Coulton gave away his music under a Creative Commons license and used tools like Eventful Demand to increase his Whuffie and thus the volume of paid performances and even increase sales of music he was giving away for free.

In Chapter 2, the Power of Community Marketing, Hunt says that smart marketers can use social networking tools to overcome consumer skepticism. People have been burned by false advertising, are overwhelmed with lots of products to choose from, and so will increasingly turn to social networks to filter the noise. Smart marketers can use social networking tools to connect with other members of these communities. She points to a 2008 study that showed that 93% of respondents to a marketing research survey expected companies they buy from to have a presence on social networks, and 85% of respondents expected those businesses to interact regularly with their customers through those social networks.

Drawing from her own considerable social networking experience, as she does throughout the book, Hunt explains how she and her colleagues were able to raise $25,000.00 in three months to fund a BarCamp event and solicit 700 sign-ups for that event. There is no need, Hunt says, to assume that successful campaigns must invest in big media buys. Social networking can be much more cost-effective, if done correctly.

For example, in Chapter 3, Turn the Bullhorn Around and Create Continue Conversations with Customers, Hunt contrasts a big media buy gone bad with a social media campaign that grew a small family wine business into an international player. Vonage spent $21 million dollars a month, which amounted to $363 per new customer, but was not able to keep its customers long enough to justify that marketing expense. Hunt acknowledges that a lawsuit with Sprint played a factor, but so did Vonage’s poor on-line reputation for low-quality customer service. They had bad Whuffie.

By contrast, Gary Vaynerchuk used social networking tools to grow his family’s Wine Library store from a business with 10 employees to 100 employees and millions of dollars in annual sales. He did so by making wine accessible to wine newbies through an on-line video podcast. After taping reviews of wines, Vaynerchuk would talk with his customers on-line, thereby developing a avid fan base who created an active on-line community to discuss his products and his product reviews. His sales shot up as a result.

A case example of a huge win for FOSS with Whuffie

Also in Chapter 3, Hunt delves into the details of Dell’s success in listening to customers via its Dell Idea Storm website. As many readers will recall, Dell lost its place as the world’s number one computer maker, in no small part due to its reputation for horrible customer service. According to Hunt, Dell turned around the bullhorn in part by starting the Dell Idea Storm website, where Dell’s customers clamored for GNU-Linux pre-installed notebooks:

“Most of the initial outpouring of ideas came from the open-source software community. Perhaps not surprisingly then, the top ideas on Idea Storm were the request for a Dell computer with Linux, not Microsoft Windows, pre-installed. Although Dell had offered a Linux-based computer to its business clients, a consumer-based Linux machine had not been available.

“The Dell Idea Storm team took this request directly to its product development department. The people there went straight to the forums to get more information like what ‘flavor’ of Linux people wanted pre-installed. Ubuntu was the number one choice. Within a couple of months, the Linux Dell was available for purchase. Although the company wouldn’t release exact numbers, Caroline [the Dell rep] told me that the sales far exceeded their projections and Dell plans to continue the program.”

Now, one-third of Dell’s netbooks are sold with Linux .

The Whuffie Factor goes on in similar fashion through 10 chapters, with Hunt fleshing out her five core principles in a flowing conversational writing style that is well-researched and well-grounded on the thinking of other respected authors, such as Doc Searls, the co-author of the Cluetrain Manifesto, and Barry Schwartz, author of the Paradox of Choice. The key value of The Whuffie Factor for FOSS projects and businesses is Hunt’s ability to model the logic of marketing. Marketing is every bit as rigorous a discipline as writing code, and its key principles are replicable, testable, and learnable through study and building on the shoulders of giants. Hunt’s extensive research and considerable personal experiences in this area make The Whuffie Factor a template upon which to build one’s own media initiatives.

The Whuffie Factor is not without its limitations. It does not set out to probe the theoretical underpinnings of a Whuffie-based economy. This book is not an academic tome, and so some academics might turn up their noses at the book as being too light-weight and anecdotal. The book does offer end notes to provide the reader with avenues for further reading, but there is no index, which I found disappointing, given the useful references which I, for one, would have liked to be able to access easily through an index.

But the anecdotal nature of The Whuffie Factor is useful, because so much of marketing is, by its nature, experimental, contextual, and hit-and-miss. A successful marketer will need to try several approaches, and the concrete nature of The Whuffie Factor, coupled with its principled approach, will offer a useful, pragmatic tool for a marketer who is staring at a white board trying to come up with creative ways to get his or her message out to potential customers or end users. Seen from this perspective, The Whuffie Factor can be seen as a juice machine for helping the marketer to squeeze out innovative new uses for Web 2.0 social networking tools.

Who should not buy The Whuffie Factor:

Don’t buy this book if you are a Ph.D. candidate looking to do research on the economic underpinnings of the Whuffie economy. The Whuffie Factor is not an economics dissertation. Also, don’t buy this book if you really really liked Cory Doctorow’s book, Down And Out In The Magic Kingdom and you were looking for a raucus follow-up to Doctorow’s mischevious novel; you are never going to find out if Julius will eventually restore his memory at the risk of wiping out the year following his first death, so live with it.

Who should consider buying The Whuffie Factor:

If you are running a small business or are a community manager of a FOSS project, and you are looking for a fresh new way to jump-start your org’s on-line presence, you might well benefit from sitting down with The Whuffie Factor. Tara Hunt is an interesting character, and her innovative spark comes through in this easy, accessible 296 page book. Hunt is someone with whom you would love to have an extended coffee break to chat about marketing, and The Whuffie Factor is the next best thing.

Visit The Whuffie Factor for more information and to purchase the book.