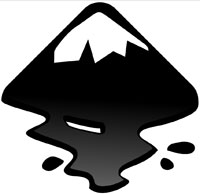 The vector editor Inkscape is what some might call a best-kept-secret among open source projects — in part, because few people outside the graphic design community have any experience working with vector artwork; also, in part, because it’s so powerful that it can seem intimidating at first blush. Here are a collection of Inkscape resources you may find helpful in learning Inkscape and in expanding your skill set.

The official Inkscape documentation is the place to start if you’re new to the program. The site links to official tutorials in more than twenty languages, and to the wiki-based reference for the app commands, tools, and features.

But don’t stop there! The FLOSSManuals book on Inkscape is another first-rate introduction to working with the toolbox, Inkscape’s paths, text, object manipulation, and effects.

Also a worthy starting point is Tavmjong Bah’s Inkscape: Guide to a Vector Drawing Program. Like the FLOSSManuals book, it takes a systematic approach to Inkscape’s features — including understanding how primitives like paths, objects, and bitmaps interact with each other. Both of these guides are completely free, and they are both works-in-progress that are updated regularly.

Finally, the Inkscape wiki has a special introductory section entitled Inkscape for Adobe Illustrator users that sheds light on the similarities, differences, and special features of Inkscape for people who know vector artwork but simply aren’t familiar with the tool.

While the links in the first section attempt to be comprehensive guides to using Inkscape, there is a lot more information contained in smaller, focused tutorials that walk through a particular editing task or effect.

Though you can search for tutorials with any Web search engine, the best place to start is probably The Inkscape Tutorials Blog, which publishes a regular feed of detailed tutorials, with step-by-step instructions. The publication schedule isn’t fixed, with most entries sourced from individuals’ blogs that you would otherwise have to hunt down on your own, but the archive contains a library of high-quality content.

Fedora Project artist Nicu Buculei also publishes a blog focused on tutorials, which you’ll find at howto.nicubunu.ro. Many of Buculei’s tutorials jump back and forth between Inkscape and other free software tools like GIMP, so you’ll want to look into those too, if you haven’t already.

Next, you should pay regular visits to the Tricks & Tutorials section on InkscapeForum.com, where readers post links to tutorials and write their own. As you might expect on a web forum, the discussion following the initial post on a particular tutorial thread is often as enlightening as the tutorial itself.

In addition to the list in the official documentation above, the Inkscape wiki has a Tutorials and Help page, which not only lists known tutorials in multiple languages, but contains a “tutorial ideas” section where people post topics they would like to see documented — and others often reply by posting a link to a completed tutorial.

Inkscape has grown in popularity enough that third-party tutorial link sites have started adding it as a category, and this is another good way to find new tutorial content. Tutorial-index.com and Pixel2Life both have dedicated Inkscape sections.

Last but certainly not least, it never hurts to do a blog search on the topic of Inkscape Tutorials — you’ll frequently discover individual posts where an author curates a list of high-quality tutorials, even if that isn’t the focus of the blog as a whole. For example, 35 Tutorials to create amazing Vector Graphics using Inkscape and 15 Fantastic Inkscape Tutorials for Creating Awesome Vector Art both come from general-purpose blogs.

A special mention is probably deserved for video tutorials, which can offer a very different approach to communicating how to implement a particular technique. Here, the clear leader is screencasters.heathenx.org — although, as with written tutorials, you can apply the same rules and find other excellent content at other sites, such as th3techies.com.

In addition to dedicated tutorials, if you are serious about learning Inkscape there are a several well-written Inkscape blogs worth following. The list includes the blogs of several artists and authors whose work regularly appears in the tutorial and manual sections, such as Tavmjong Bah’s blog and Nicu Buculei’s blog. Also worth subscribing to are GrimeGraphics and the #Inkscapers group on DeviantArt.

You should also check out Planet Inkscape, which aggregates the blog feeds of more than a dozen Inkscape developers and artists — not only is it the best way to learn about new Inkscape features, but most of the developers are Inkscape users as well, so they frequently have creative content to share.

Finally, take a look at Libre Graphics World, an independent news site maintained by photographer Alexandre Prokoudine. LGW covers all aspects of open source graphics, including not just vector design but raster graphics, photography, 3-D, typography, and much more. But even if all you cared about was Inkscape, it is often the first place to read about Inkscape news, reviews of new releases, and interviews with developers.

Of course, nothing beats interactive discussion with other artists. For this, you need to go to InkscapeForum.com. On top of the tutorial board mentioned earlier, this is the place to be to ask questions, showcase artwork, get tips and help from other Inkscape users, and learn what’s new-and-upcoming in Inkscape development.

Another important discussion site to check out is the . Like the LGW news site, it is focused on more than just Inkscape alone, but it has a dedicated vector graphics discussion board for Inkscape and similar programs.

Brush resources
Aside from instructional resources like tutorials, another way to expand your Inkscape skills is by picking up new content and tools. In the Illustrator circles, for example, you’ll find a lot of discussion about sharing brushes. That’s because Illustrator supports using custom brush shapes, which users can copy and exchange with one another.

Inkscape does not use the same approach, but you can achieve many of the same results with Inkscape’s paths, tiled clones, and raster images. The Wikihow article Use Brushes in Inkscape explains the different techniques and shows examples of each.

A more in-depth explanation of Inkscape brush behavior can be found in Buculei’s Grungy Brush Tips and Tips for using brushes in Inkscape. This way you can turn any image — vector or raster-based — into an Inkscape brush.

Inkscape supports user-switchable color palettes (and is moving to support swatch books for gradients and other texture samples on a per-document basis). But you’re not limited to just those that ship with the Inkscape binary.

You can import palettes from other open source apps like GIMP. This post explains how, including how to find good GIMP palettes, and there is even a video demonstrating how it works.

You can also design color schemes with Agave and use them in Inkscape, or import them from other formats with SwatchBooker and save them for use in Inkscape.

There are even cool tricks you can employ like generating a color palette based on a raster image such as a photograph, then saving it locally.

Some of Inkscape’s most impressive features come from its extensibility with plugins and user-written scripts. The definitive guide to finding Inkscape extensions is the Extension repository on the project’s wiki. There is also an Extensions wiki category that occasionally catches other pages you will want to see. There are around fifty extensions currently listed.

Scripts are a little different than extensions; for one thing they are easier to write, and you can use common languages like Python to create your own. Here again the wiki has a guide to getting started, plus a detailed tutorial on using Python.

Often new Inkscape releases roll what used to be extensions into the official application as new effects, so you can find a lot of helpful tips on new extension in the Effects reference — which is also a great way to learn about the tons of different special effect functions Inkscape supports.

The Inkscape Resources section on InkscapeForum.com is another essential place to look for scripts and extensions. Forum readers regularly post new work that they themselves have created, plus link to scripts and extensions found elsewhere. For example, you can find a extension to export TIFF and PDF output in CMYK color spaces, and an extension that replaces fonts within an Inkscape document.

Most of what we have talked about already is very Inkscape-centric, if not outright Inkscape-specific. But there are far more design resources out there for you than just those created for this application in particular.

For example, the Open Clip Art Library is an online community of user-created artwork — in most cases, the term “clip art” is a little misleading; we’re talking about high-quality designs and graphical elements, not icons. All of the content is free to use under public domain terms.

Likewise, the Open Font Library is a resource site for typography available under the Creative Commons Attribution-ShareAlike license; you can search for fonts to use in any of your projects without fear of running into licensing trouble.

But the “free culture” projects aren’t the only sites you’ll want to visit. Sites like Dezignus.com also focus on creating and sharing design elements like brushes, textures, backgrounds, and other vector artwork. Thanks to Inkscape’s ability to import almost any graphics format on the planet, you can be sure that these free resources are compatible.

The same goes for most of the rest of the free design resource sites on the Web today. Designer blogs and forums often post lists of new and popular art resources, like 14 Free vector art resource sites on TheGraphicMac — but guess what; none of them are Mac-specific. The same goes for most if not all of the sites in SpeckyBoy’s 49 Amazing Resources for Free Vector Graphics — you don’t just have to look at them for inspiration; you can download what you need.

Finally, Inkscape uses the W3C’s standard Scalable Vector Graphics (SVG) as its file format, so there are plenty of good SVG resources and tutorials. A good place to start is either W3School’s SVG Tutorial or SVGBasics.com. Both offer a good introduction to the format and what it can do.

You can also look for more specific tutorials, much like you would with Inkscape itself. LearnSVG.com has a broad selection, as do independent sites and bloggers. KenLinDev has an entire section, including working with SVG filters, and there are lots of good one-shot tutorials, such as Shelley Powers’ multi-part series on SVG in flexible design.